I like watching TV shows on Hulu, but I’d like it more if the ads were better-targeted. There’s no reason why internet TV should follow the same “five blocks of ads that might appeal to the show’s demographic, per hour” paradigm as broadcast TV: why not present the viewer with some choices? It’d be great if I could choose to watch ads for products that match my interests and circumstances, rather than being subjected to ads for things I am not interested in buying (like a new car, or womens’ running shoes). Besides, Hulu has so much less ad time than broadcast TV (about 3 minutes per hour rather than 15): shouldn’t those ads be as well-targeted as possible?

Not sure what genre of underground dance music from Britain to invest in? Thanks to Google Trends, we need wonder no longer: 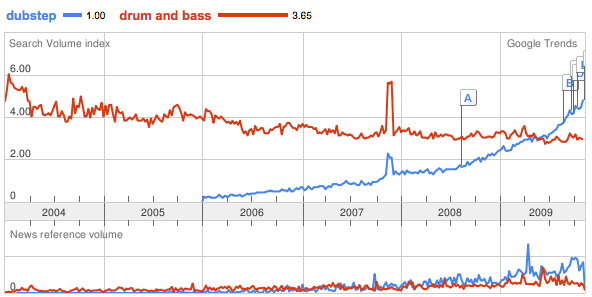 Update (6 Dec 09): Looks like I’m not the first person to spot this trend: this guy wrote a blog post about it nearly a year ago! 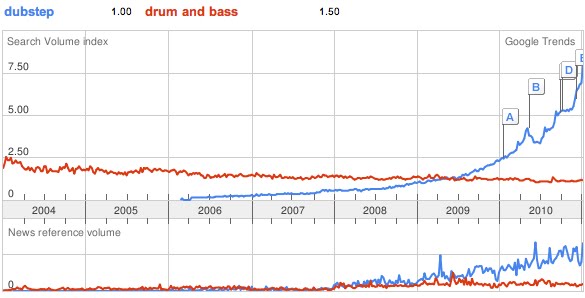 I’ve been using Google Voice since early August, and although I haven’t quite started giving out my GV number to everybody I meet, I’m definitely a big fan. Here’s why:

All in all, I’ve had a really good experience with Google Voice. I use it a few times a week to call my family in the UK, and I’ve never had cause to complain about it - it’s easy to use, it’s economical, and it’s reliable. I’d strongly recommend it to any expat in the USA.