Google Chrome is a great browser for many reasons, but I particularly admire its ability to silently, unavoidably upgrade. The wider impact of this feature is made apparent on Clicky Marketshare, which shows how when a new Chrome is released, the previous version completely disappears: 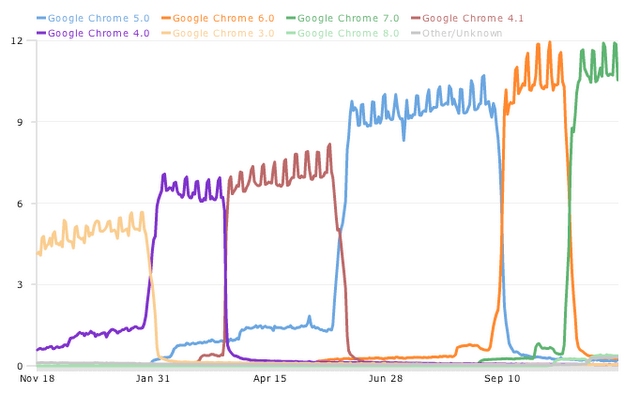 In a matter of days, the old version of Chrome has vanished from the web, and all its sins are forgiven. By constrast, Internet Explorer versions 6 and 7 still hold considerable marketshare despite long being deprecated, and we’re all suffering for it: 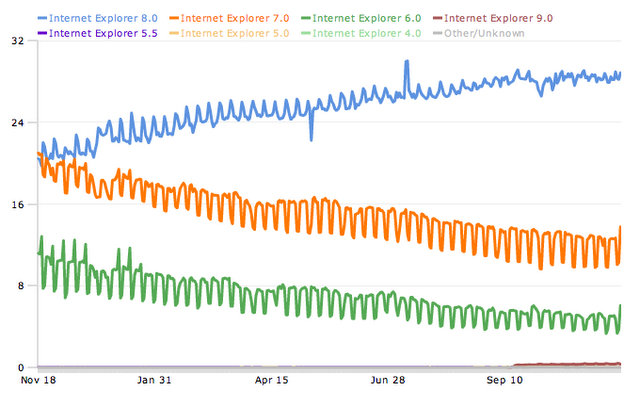 Those browsers are far behind the curve, with many bugs, and their continued existence is responsible for a significant stifling of innovation after all, what’s the point of making better websites with advanced HTML/CSS if most of your users won’t be able to see it? If only Microsoft had incorporated such a dramatically effective auto-upgrade all those years ago, the work of a web developer would be a lot more enjoyable and a lot less frustrating.

Alas, there is no IE6 killswitch, and though its numbers are moving encouragingly lower, it remains an occupational hazard. So, until the last line of IE6-specific code is written, I will dream of a button in Microsoft HQ that with one fell swoop will bring all web users into the new decade.